Note: this is Part 2 of a series on depth of field. Click here for part 1, which explains the relationship between aperture size and depth of field.)

Besides using aperture size, photographers can also control depth of field by changing the camera-to-object distance or the lens focal length. Specifically:

These two effects are closely related, and the quest to understand them offers a great example of how we can use equations to augment our intuition while solving relatively complicated problems. Read on if you want to learn more!

Before we get to the heart of this post, we need a quick review of the factors that determine depth of field. In my previous post about aperture size and depth of field, we saw that a point object produces a circle (the circle of confusion) on the camera sensor when the sensor is not exactly located at the image position. When the circle of confusion is “small enough,” we say that the object is in approximate focus. There is a range of image positions surrounding the sensor that all produce circles that are small enough to be in approximate focus. We can refer to the width of this range as Δdi,acceptable. Likewise, there is a corresponding range of object positions that produce images within this range. The width of the range of object positions is called the depth of field (DOF). These ideas are illustrated in the figure below:

Let’s first consider the relationship between depth of field and object distance. To begin, let’s take a look at some ray diagrams that illustrate what happens as we increase the distance between the object and the lens for a fixed focal length. We’ll move the object twice (by the same amount each time) and see how the image changes:

We can make two important observations based on these diagrams:

The Tricky Part of the Problem

So what does this mean for the DOF? The answer to this question is not very straightforward because we have two competing forces. As the object moves farther from the lens, the angular effect decreases Δdi,acceptable to a smaller value. However, the sensitivity effect means that this smaller Δdi,acceptable corresponds to a larger DOF than it would have at the original object position. Depending on the relative strengths of the angular and sensitivity effects, the DOF might decrease or increase!

To proceed any further, we will need to quantitatively determine the depth of field for different object distances. For a lens with a given focal length, the general procedure would be as follows:

It is possible to do this graphically by drawing bazillions of ray diagrams. However, it is much easier to calculate the depth of field numerically using equations that describe a simple model of a lens. Let’s do that instead!

The thin lens equation is the key to numerically determining the depth of field. If you’ve taken a physics class before, you’re probably pretty familiar with it. For a point-sized object that is radiating light towards a lens, the equation relates the object-to-lens distance (do), the image-to-lens distance (called di), and the lens focal length (called f) in the following way:

Strictly speaking, this equation only applies to idealized lenses that have zero thickness. Of course, such lenses do not exist in real life. However, camera lenses are carefully designed so that they function almost exactly like perfect thin lenses. We won’t be able to completely trust the exact values of the numbers we get from this equation, but we should be able to believe the general trends we uncover.

Note that the thin lens equation contains all of the information we learned from the ray diagrams I drew above. Specifically, we can use the thin lens equation to discover the angular and sensitivity effects. To do this, we can solve the equation for the image distance and then plot di vs do for a particular focal length, say 50 mm: 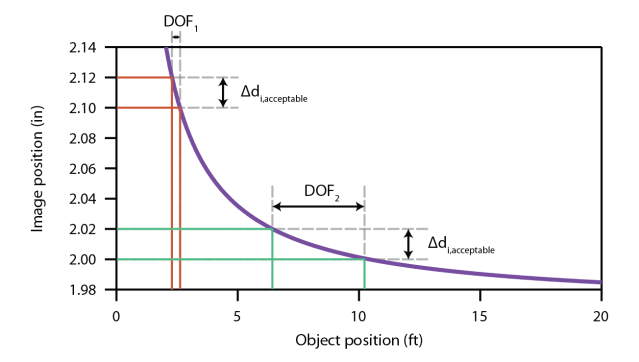 We can easily see that as the object position increases, the image position decreases towards the focal point. From this we can infer the angular effect. Additionally, we can see that the curve becomes flatter at larger object positions. From this we can infer the sensitivity effect. I have explicitly illustrated this by showing how the same Δdi,acceptable can result in a larger DOF at larger object distances (smaller image distances).

A Model for Depth of Field

Before we can numerically calculate the depth of field, we will need to determine the diameter of the circle of confusion (C) as a function of object position, focal length, aperture radius (A), and sensor position (S). The following diagram illustrates how these quantities are related, and also includes the object height (ho) and image height (hi):

First of all, we can find the diameter of the circle of confusion using θ1, θ2, di, and S:

Next, we can find the angles using A and hi:

When we combine these three equations, the image height actually cancels out:

As the final algebraic step, we can find the image distance using the thin lens equation. When we combine everything together, we can get a big ugly equation for C. Don’t worry, I only wanted to give an outline of how to do this — I won’t bore you with the details of the algebra!

Now that we know how to find C, we can choose S, A, and f and calculate C for various object positions. For example, we could imagine using a 55 mm lens to take a picture of an object located 10 feet from the camera lens. A typical aperture radius is around 1 inch. The following graph shows the diameter of the circle of confusion for various nearby object positions: 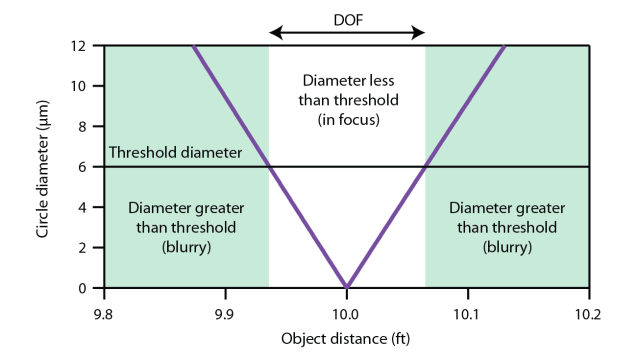 I use a Pentax K10D camera. Its sensor has 10.75 million pixels that are situated on a rectangle that is 23.5 x 15.7 mm. We can therefore estimate that each pixel is about 5.9 μm across. If we choose 6 μm as our threshold value for the maximum circle diameter, we can find the depth of field to be about 1.7 inches across.

Finally, we can repeat this process many times for many different object distances to see how the depth of field changes: 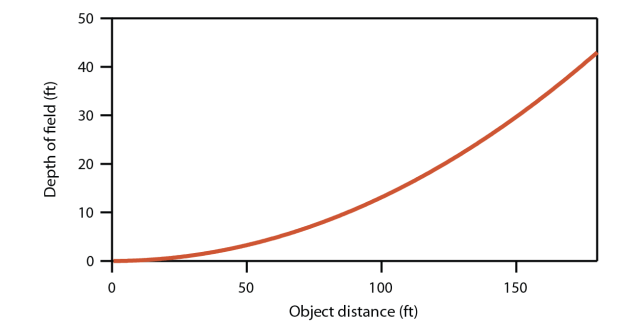 Focal Length and Depth of Field

We can reuse some of the same ideas to understand how focal length affects depth of field. Specifically, let’s use the thin lens equation to plot di vs do for different focal lengths: 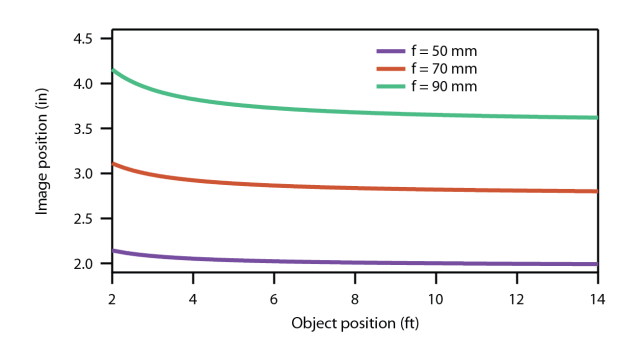 From this graph, we can see that for larger focal lengths, the image distance changes more rapidly with object distance. In other words, the image position is more sensitive to the object position when the focal length increases. We know from our previous analysis that the sensitivity effect determines the depth of field, and that an increase in sensitivity should make the depth of field decrease. We can check this prediction by using our simple model to calculate the depth of field for different focal lengths. Again, let’s imagine using a camera to take a picture of an object that is 10 feet away. We’ll assume that the aperture radius is 1 inch and that the focus threshold is 6 μm.

Our original conclusion was correct — as focal length increases, the depth of field decreases!

To reiterate what we did:

Note that if we had just gone right to the numerical model, we would not have understood that the sensitivity effect is the underlying cause for the behavior! This example illustrates the importance of combining intuition with calculations while trying to understand complicated problems.

So now we have determined three rules for manipulating depth of field:

Of course, it’s hard to predict how the depth of field will change when we modify focal length, object position, and aperture size simultaneously. Nevertheless, these are useful relationships to know. I hope you can use them in your own photographic endeavors!

8 comments on “How Do Object Distance and Focal Length Affect Depth of Field?”